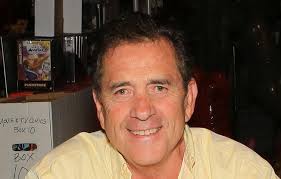 “Star Trek: Deep Space Nine” admiral of the show, Barry Jenner, has did at the age of 75-years-old. The veteran actor has appeared in this classic space series and tons of other TV shows throughout his over 40 years of acting.

StarTrek.com and the Los Angeles Police Reserve Foundation confirmed his death on August 9, 2016, due to leukemia. He served in the Reserve as an officer for many years in Hollywood.

Besides playing Admiral William Ross in many episodes over a couple seasons of the space drama, Barry also did voiceover work for the video game “Star Trek: Deep Space Nice: Dominion Wars”. This made him a huge hit among Trekkies on the convention circuit, as they were after his figurine.

Before making it big on Star Trek, Jenner had a successful career on the show “Family Matters”, as the character Lieutenant Murtaugh. He also played on shows like “Knots Landing,” “Somerset,” Hart to Hart, “St. Elsewhere,” “JAG,” and “Simon & Simon.”

The name Barry is an anglicized form of Bairre, which is a diminutive of Fionnbharr or Barrfhionn meaning “fair hair.”. The first famous person with this name is Saint Fionnbharr of Cork a bishop from the 6th-century that performed miraculous cures.

Furthermore, it is sometimes found as an Anglicized form of Berach, which comes from the Gaelic Biorach, which means “sharp.” This seems more like Barry Jenner as he was very sharp, but not fair haired. Jenner will be missed by many.

What's Your Post-Baby Fashion Style
How much do you know about vacination and child illness?