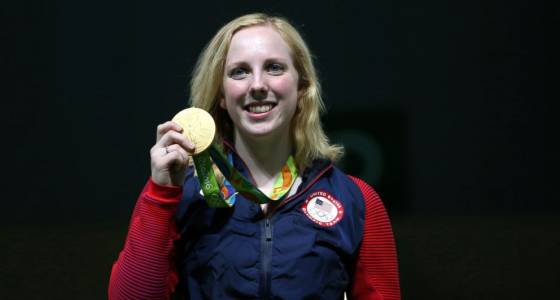 The very first Olympic gold medal has been taken home by an American teenager in the Rio de Janeiro Games. The 19-year-old, Ginny Thrasher, is a sophomore at the West Virginia University and won the 10-meter air rifle event on Saturday.

Just edging out Du Li, the second place medalist from China, in the Shooting Center in the neighborhood of Deodoro in Rio. Thrasher obtained a record score of 208 in the final round, only a point ahead of the competition.

Overall, this has been an amazing year for Ginny Thrasher. She also won the freshman title at the NCAA’s air rifle tournament in March, as part of the WVU’s rifle team.

The name Ginny is a diminutive of Virginia, which is a feminine form of a past Roman family name Virginius or Verginius. Although the family name has an unknown meaning, the name is associated with the Latin word virgo meaning “maid” or “virgin”.

The name became popular in the New World after the first English baby born was named Virginia Dare. In fact, the baby was named after the Colony of Virginia, and this colony was named after Elizabeth I - the Virgin Queen. Due to this fact, the name has been more common in American than in other parts of the English-speaking world.

It wasn’t until after the 19th century, that the name became popular in places like Britain, outside of America. In all types of forms, from Ginny to Gena.