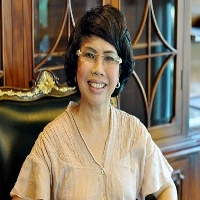 As the chairman of TH Group / Bac A Bank in Vietnam, Thai Huong is attempting to revamp the dairy industry. Thai is attempting to switch over to liquid from powdered milk, and purchased a dairy farm in Russia. She invested around $2.7 billion into agriculture, putting $500 into the dairy farm with a goal to end up with a herd of 350,000 cows.

The Vietnam National Nutrition Institute states that many customers can’t tell the difference between different types of dairy products on the market. Both foreign and domestic experts highlight the trend of using more milk in Vietnam. This gave Thai the confidence to introduce three new milk products to the local market.

She also founded Bac A Bank, which is a joint-stock commercial bank that serves as the financial and investment consultant for TH Group. In 2015, TH Group made a profit of $45 million and a revenue around $215 million. Huong is busy at work running her companies and is a majority shareholder in both organizations. In 2016, Thai Huong was named one of Asia’s 50 most powerful and influential business women by Forbes magazine.

What Song Should be your Baby's Lullaby?
Pregnacy, baby & parenting: how well do you know these fact?