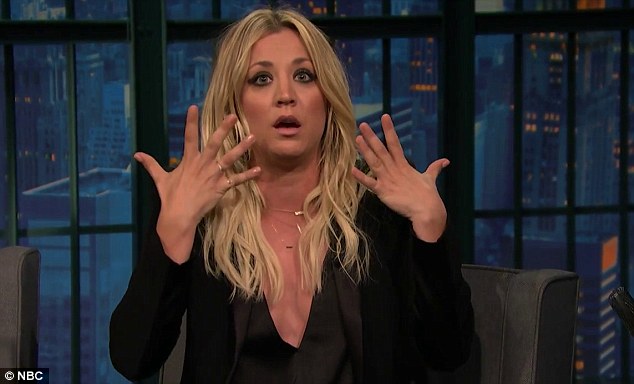 The star from The Big Bang Theory, Kaley Cuoco knows how to cause a fuss on social media. The actress did not leave a lot to the imagination in a cameo on Snapchat for stylist Brad Goreski.

Leaving a huge impression, Cuoco was between outfits during the photo shoot and bared her breasts. It wasn’t too revealing as the star was dressed in a pink robe and used the red heart emoji to cover her nipples.

Although this photo is a bit scandalous, it is not strange for the star as she has been very outspoken about receiving breast implants in 2014. The actress was in love with her implants immediately – it was one of the best things to happen in her life.

The feminine name Kaley is a variant of Kaylee, which is a combination of the word Kay and the suffix lee. The name Kay is short for Katherine, which is taken from the Greek name Aikaterine or Hekaterine meaning “each of two”.

The name was made famous by a legendary saint from the 4th century, who was a martyr from Alexandria. The saint originated from Syria, but the returning crusaders brought the name over to Western Europe. It then became popular in England and has seen many versions, from Katherine to Kathy. It has been given to many notable people, from the American actress Kaylee DeFer to the character from Firefly and Serenity Kaylee Frye. Now, the list includes the star Kaley Cuoco.

Choose your Baby's Name with Care

Nature's course allows you to take up to ten months to think about baby names for both baby boys and girls. It is therefore a wise idea to use this time proactively and research the baby name you will eventually choose.