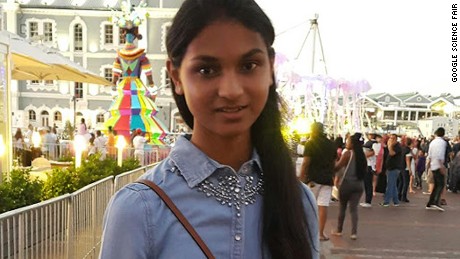 A 16-year-old from South Africa is concerned about the drought in her nation and the current crisis that people and animals are facing. Kiara Nirghin lives in one of the thousands of households and communities that are facing water shortages. The country is experiencing one of the worst droughts in its history, which has left eight provinces in a state of disaster.

Although the agricultural union – Agri SA – requested a billion dollars from the government to aid farmers through the drought, it has not yet happened.

The crisis inspired a Johannesburg schoolgirl to find a perfect material to help fight the drought. She invented a super absorbent polymer made from orange peels and avocado skins that can store water, allowing farmers to maintain crops. Moreover, the creation is sustainable and environmentally friendly, as it uses only recycled and biodegradable waste products.

She even won the Community Impact Award for the Middle East and Africa from Google Science Fair with her creation – No More Thirsty Crops. Next, Nirghin is set to work at Google with a mentor to develop the polymer and start testing it in the field.

The name Kiara is a variant of Chiara or Ciara, which was taken from the Irish word ciar which means “black”. The name became popular after the song “This Time” by the duo Kiara was released. Gaining, even more, popularity when the movie “The Lion King II” came out.

Now the name will be popular, because of the important work Kiara Nirghin is doing.