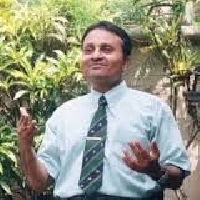 As a chartered chemist and scholar by profession, Dr. Ajith Chrysanta Stephen Perera has been recognized for many achievements, like in the field of analytical chemistry. However, he has also received international admiration for his achievement in other fields, including cricket and quality assurance. As a senior manager in industry and a qualified training instructor, Perera is both professionally and academically well qualified to get the job done.

Currently, he is working as a speaker, writer, author, disability rights activist and an accessibility adviser-assessor who serves humanity. Perera is recognized by many reputed bodies overseas and three learned societies. In fact, he is the founder and chief executive and secretary general of Idiriya, which is a not-for-profit humanitarian service organization located in Sri Lanka.

As a wheelchair user, Perera is a pioneer in Sri Lanka, campaigning for Social Inclusion that focuses on equal opportunity, dignity, and justice for People of all Abilities in everyday life. in 2016, Dr. Ajith Perera was named one of the top 50 most influential disabled people in the world at a international disability empowerment conference by Shaw Trust and Powerful Media.

One who conquered the mind