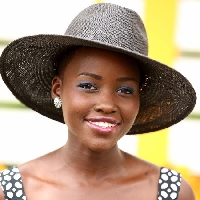 Lupita Nyong'o was raised in a very artistic family, with many get togethers that had the children performing. She was born to Kenyan parents in Mexico but was raised in Kenya. She went to college in America at Hampshire College obtaining a degree in film and theater studies.

After school, Nyong'o started her Hollywood career as a production assistant. Then, in 2008, began acting in East River, which is a short film. She then returned to Kenya to be in the television show Shuga. At the same time, she produced, wrote and directed a documentary called In My Genes.

Her acting inspired her to go to the Yale School of Drama and she got a Masters degree in acting. After graduating she starred in her first feature film as Patsey in 12 Years a Slave. She even won an Academy Award for Best Supporting actress. In fact, Nyong'o is the first Kenyan and Mexican actress to win an Academy Award. In 2016, Lupita Nyong'o was named one of the most influential Kenyans by Africa's reputable and leading media and PR firm, Avance Media together with Jagari Designs.

The feminine name Lupita is a diminutive of Guadalupe, which is taken from a Spanish title for the Virgin Mary – Nuestra Senora de Guadalupe – which means “Our Lady of Guadalupe”. Where Guadalupe is a place name in the Spanish language and refers to a famous convent site, and means “river of the wolf” in Arabic. There are many notable people with the name, from Lupita Ferrer the Venezuelan actress to Lupita Tovar the Mexican actress.

what kind of personality will your baby have?

For many years now, there has been a trend among parents to make up a name to further enhance their baby's unique identity. This is not an unwise idea. Many of the names used today were made up hundreds of years ago and did not necessarily have a specific meaning. The only problem ....