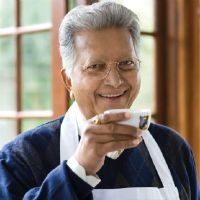 Merrill Fernando started his career in the tea industry, as a taster at the Ceylon tea industry. He was chosen as one of the very first Sri Lankan tea tasters to go to London to learn about tea. In the past, many people believed that Sri Lankans were not capable of assessing tea because they consumed too much curry, which impacted their taste buds.

While in London learning about tea, he discovered that the tea industry was run by a system of “colonial exploitation” that used producing countries for their raw materials. However, all value addition and branding were done across seas and the profits never reached any of the producers. This bothered Merrill and he decided to make his own brand of tea to combat this problem. In 2016, Merrill J. Fernando was named one of the most influential people in the country, as a Sri Lankan of the Year, at the Ada Derana Award Ceremony.

The masculine name Merrill is taken from an English surname that is derived from the given name Muriel. The feminine name Muriel is from the Medieval English version of a Celtic name that is probably related to the Irish name Muirgel, which means “bright sea”. Muirgel is taken from the Gaelic word muir that means “sea” and geal that means “bright”. There are a few notable people with the name, from Merrill Cook the Utah politician to Merrill Garbus the musician that did the experimental indie project called Tune-yards.