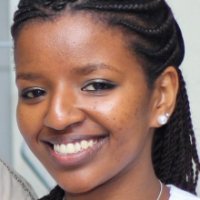 As the manager of a team at Rupu Kenya, Stacey Ondimu is already making things happen at the e-commerce startup. The company is a website that offers deals to people, under the Swiss Company the Ringier Group, which has a presence in both Nigeria and Ghana.

Ondimu has a degree in computer science, software development, and 3-dimensional animation under her belt. She was inspired by her father to get into the world of IT at a young age. Eventually she entered the University of Nairobi to pursue a career in the technology industry.

For many years, Ondimu tried to find her place in the industry, as she didn’t find coding or development that interesting. It wasn’t until she started designing and development at Rupu that her journey began. In 2016, Stacey Ondimu was named one of the most influential Kenyans by Africa’s reputable and leading media and PR firm, Avance Media together with Jagari Designs.

Is The Name Trendy And Currently Popular? Not Too Popular Is It?

Another thing to keep in mind when naming your baby is whether the name is currently popular and trendy or not? Names like Calista and Leonardo are of all the rage, thanks to Ally McBeal - the hit TV series and Titanic - the movie.