Finding the absolutely perfect name for your baby may be a challenging proposition for you given the millions of choices that vie for your attention. However, predicting the hottest baby name trends for the immediate future may not be as daunting a task. The reasons are simple. You don't have to look beyond current trends to predict future trends when it comes to naming a baby. Therefore, to arrive at a few possible recommendations for your little baby whom you expect to welcome in 2015, we will look at 2014 and beyond to see what everyone expects to be trending in 2015. After all, why would you want to give your baby just a name when you can give your baby an exclusive identity which will make your little baby proud one day?

Our faith, religious beliefs and spiritual inclinations, generally have much to do with the way we pick names for our babies. However, this is not always true. For instance, every baby who has been named Mohammed in the UK in 2013, the #1 baby name for all of UK, did not belong to a family that practiced the Muslim faith. Mohammed is just a cute name. Similarly, every baby girl named Shabnam in India, a Muslim name to the core, does not belong to a Muslim family. There are many Hindu and Christian girls in India who have been given this name by their doting parents. That said, names like Joshua, Isaac, Noah, Matthew, Joseph, John, and Ishmael will continue to remain popular in 2015 owing to their Biblical connotation and deep-rooted popularity. 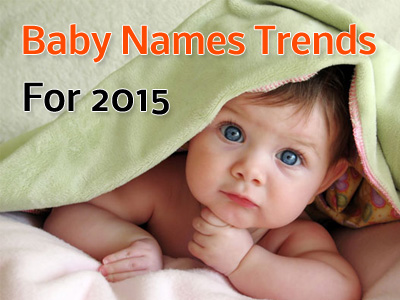 A safe trend, on which you can bet your last dollar without fear, is the fact that whatever name the Royal Couple in England chooses for their baby will not only trend throughout 2015 but will also top the charts by the time Christmas 2015 arrives. Prince William and Princess Kate Middleton, who will usher in their darling little one tentatively in April 2015, have as many options to choose from as any other couple. However, British royalty is known for the traditions they follow. Many self-styled baby naming pundits believe that the name will be derived from ancestry:-


While the London bookies are busy taking bets on James (11:1) and Elizabeth (10:1), royal biographer Andrew Morton and sensation whiz, who wrote a highly publicized biography of Princess Diana, believes that Diana and Elizabeth will be a part of the name if it is a baby girl as a testament to Lady Di and Queen Elizabeth.

A trend we noticed in 2014 which we believe will assume center stage in 2015 is the way baby names with a popular ending, a suffix of sorts are growing in popularity. Baby girl names which end with "bella" such as Isabella, Mirabella, Rosabella, and Arabella will continue to remain trendy especially in the US, Canada and Europe. As far as boy names go, the ending "ett" as in Everett, Emmett, Beckett and Bennett will rise in popularity. There really doesn't seem to be a rationale for this trend much as we looked hard and it seems to us that their popularity just might have to do with the fact that these names are actually pretty, easy to pronounce, and are nowhere near saturation.

What Does The Name Mean?

Once you select a name that you and your spouse really like, go ahead and find out what it means. Often the nicest sounding names have extremely unpleasant meanings or means nothing at all. While some parents are ok with that, others may not be.

Choosing a name for your baby is indeed one of the greatest moments of euphoria for parents. The arrival of a baby in the family is the culmination of many months of planning and anticipation punctuated with periods of anxiety and concern.