The countdown to 2015 has commenced, the enchanting Christmas tree at Rockefeller Center in New York City has been lit and Christmas is already in the air! What is more, the jury has returned with the verdict and the top baby names for 2014 are already making the rounds.

Although the top baby names list from the US Social Security Administration is considered the "official" judgment call on which baby names in the US (with parents around the world watching keenly) are ranked, there are other informal lists that are regularly announced by online magazines, baby portals and even by authors once in a while in their baby name books. At Babynology, we meticulously watch all the sources and resources for baby names like friendly hawks and not only include them in our database but also provide their meanings and origins to help you pick the loveliest name for your little one. The list which follows is our contribution based on our observations and the trends we have been watching diligently. 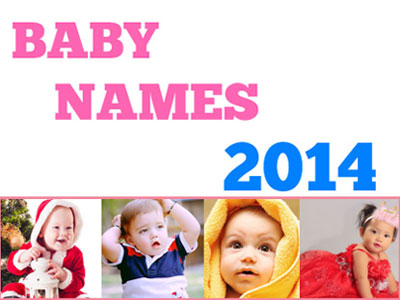 Top Baby Boy Names for 2014 in no Particular Order

Top Baby Girl Names for 2014 in no Particular Order

There are many names for baby girls that can be traced to Christmas and the arrival of Baby Jesus, especially in the Catholic tradition. We bring to you a short list of baby girl names that we like:

Our top list of baby boy names and baby girl names featuring 20 names each and one bonus baby name reflects the way in which baby names continue to remain global. Baby naming conventions around the world are governed more by cultural factors than they are by national geographies. For instance, the name Sophia is the top baby name not only in the US but also in Brazil. Sophia, with a variance in the spelling, Sofia, also features on the top baby girl names list for Australia, Russia, Germany and Malasia. Other names which made it to the top baby girl names list in Brazil, which are also very popular in the US and Europe include Julia and Alice. Similarly, names like Sofia, Maria, Daria, Arina, Anastasia, Varvara, Victoria and Anna, which are featured on the Top 10 Baby Names List from Russia, are also popular in the US and Europe.

It is no secret that baby names, which make it to the Top 10 lists, are often influenced by show biz. This trend holds true for 2014 as well with many of the top baby boy and baby girl names becoming popular owing to their celebrity status. For instance, Arizona from "Grey?s Anatomy," Huck from ?Scandal? And Fitzgerald, also from the same show, made it to the top baby name lists this year. Idina Menzel, who sang the title track for the Disney runaway hit, "Frozen," may have inspired the popularity of her first name which also featured prominently. The Disney phenomenon may also have inspired top baby names such as Elsa, Duke and Hans.

"From TV shows to sports news, many interesting factors affect parents' naming choices," as the Huffington Post aptly points out.

The Mystique of Baby Girl Names

The arrival of a new baby girl in the family brings with it a deep sense of joy and happiness to one and all. This is specially true for the father because the uniquely enchanting place daughters have for Dads is legendary. Choosing a baby girl name for your newly born miss isn't really as complicated as it seems.